Get Back to Nature

Shake off the winter blues and cabin fever and get back outside! The Oil Region has more than 65 miles of paved bike trails, the longest continuous segment of the Erie to Pittsburgh Trail, along with tons of great gravel roads, and single track mountain biking. You can even compete in the Roughneck Gravel Roubaix or Bike the Wilds series at Two Mile Run County Park. If you’d rather stay on foot, there are miles of hiking trails to explore, including the 30+ mile Gerard Trail within Oil Creek State Park. Run the Oil Creek 5 & 13 Stacked Trail Races in preparation for the Drake Well Marathon for a chance to qualify for Boston or to train for the OC100, a hundred mile endurance race through “the Valley that Changed the World.” Not everything is a competition, though. Slow down and take it easy with a little fly fishing on Oil Creek or float the Allegheny River. The Allegheny is also used by jet boats and traditional motor boats, and has some deeper pools that can support water-skiing (such as the 2-mile pool accessed from the Oil City Marina.) There are plenty of places to camp and stargaze, and even more if you’d just like to picnic.

Go Back in Time

Venango County and portions of neighboring Crawford County make up the Oil Region National Heritage Area, a congressionally designated historic site similar to a National Park, because this is the birthplace of the modern oil industry. This means even a casual visitor will encounter relics from the oil boom and architecture commissioned by some of the wealthiest people of the time. Those who want to take a deep dive into history can visit Drake Well Museum and Park for hands-on activities and exhibits indoors and out, depicting what life was like in the late 1800s and how the birth of the petroleum industry changed everything moving forward. Visitor Centers and self-guided tours in Titusville, Oil City, Franklin, and Emlenton reflect each community’s contribution. Boomtowns like Pithole and Petroleum Centre give off a somewhat spooky vibe as you reflect on the lawlessness of oil speculators out to get rich quick by any means necessary. Ride the Oil Creek & Titusville Railroad through Oil Creek State Park and imagine the tumult of the burgeoning billion dollar industry.

With such a storied past and literally rich history, the Oil Region is brimming with breathtaking architecture, like one of only six complete sets of Tiffany Windows remaining in the nation, just a couple of blocks from the second oldest Civil War monument in PA.

Shop downtown Franklin’s Liberty Street, do a little outdoor dining at Benjamin’s or Bella Cucina. Catch a live show at the Barrow-Civic Theatre or a free outdoor concert. Then find a new favorite brew at Trails to Ales II by sampling The Beer Wall, a wide selection of self-serve taps. At the southern end of the Oil Region you can indulge in German-style fare and beer at the Emlenton Brew Haus or enjoy dinner on the water at the Allegheny Grille, named #1 in PA for waterfront restaurants. Oil City brings the drinks with special events like “Oil City Uncorked” with wineries, distilleries, and breweries set up for a fun night of sampling and BridgeFest, which turns Veteran’s Bridge over the Allegheny River into the party spot with music, food, and booze.

Other celebrations, concerts, art exhibits, and festivals bring flavor to our communities, but our collection of independent restaurants and shops have all the tastes you crave, from Fancy Friday pizzas at Bud’s to unusual flavors of kombucha on tap at Core Goods, to specialty oils and vinegars at The Olive Vault, and a coffee whiskey at Grumpy Goat Distillery.

Come out, explore, and find your new favorite things in the Oil Region! 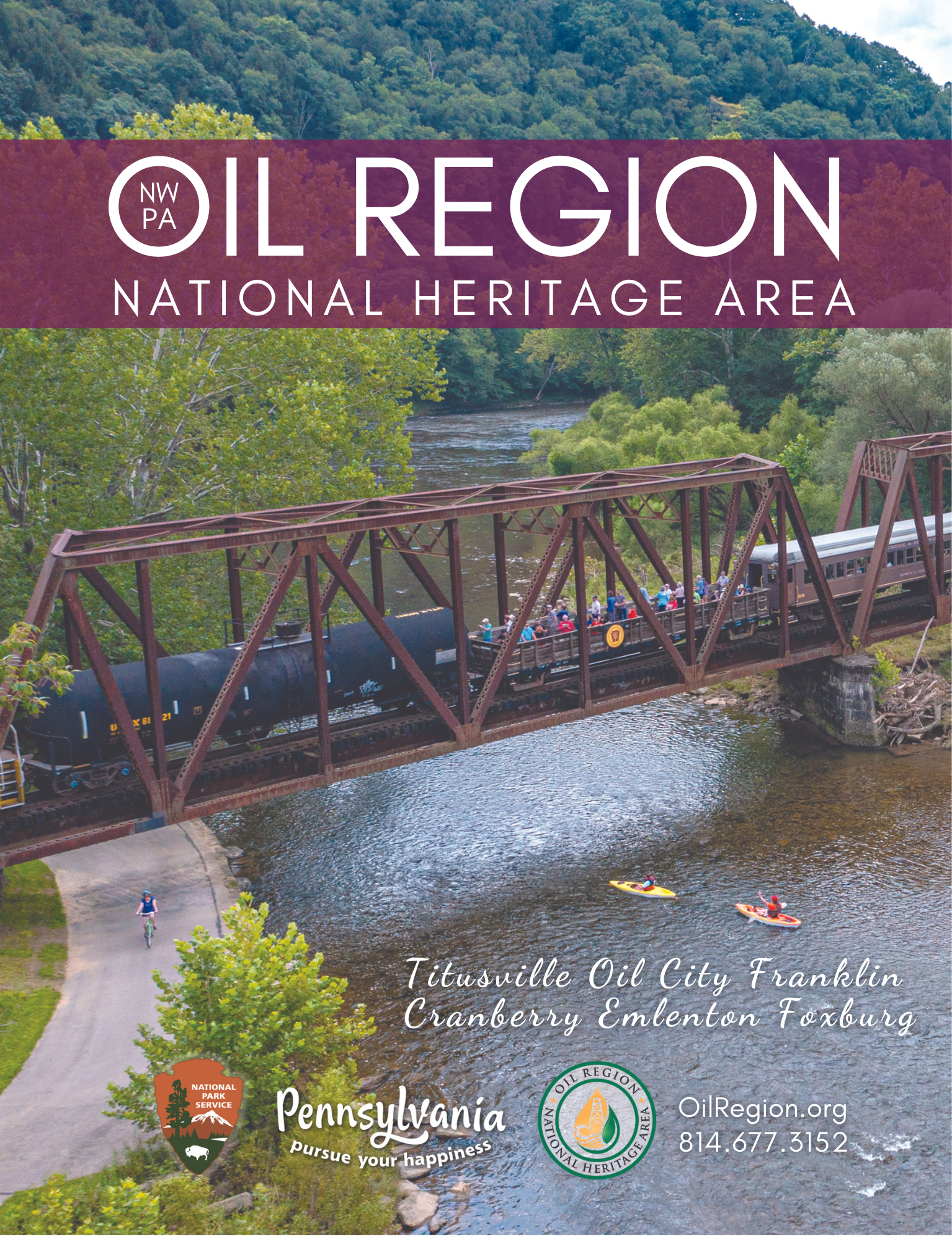 Welcome to the Oil Region National Heritage Area in northwestern Pennsylvania. Plan the perfect stay, whether it’s for an afternoon or an entire week, and learn about the characters and innovations that altered the course of history. Enjoy a variety of activities for outdoor recreation, arts and culture, as well as special events in the community.

This site uses functional cookies and external scripts to improve your experience.

We use cookies and externals scripts to ensure that we give you the best experience on our website. If you continue to use this site we will assume that you are happy with it.

NOTE: These settings will only apply to the browser and device you are currently using.